Join us virtually for a Monday Night Philosophy conversation with Kitty Ferguson about the life and scientific theories of Stephen Hawking, whom she first met in 1988. That encounter began her mid-life transition from being a professional singer, music teacher and Juilliard graduate to an explainer of difficult scientific concepts and Hawking’s biographer.

We will also discuss her nine other books, which she wrote in the clearest possible manner, translating from the “language” of mathematicians, scientists, and other experts into the language of the rest of us, without dumbing down the ideas. There is nothing more Pythagorean than that combination of clarity, theoretical science and music, and Ferguson’s childhood and family life, even more than her formal education, prepared her well for merging all three talents. 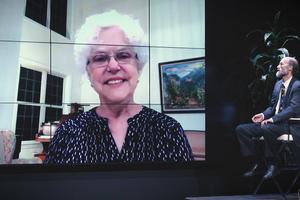