Join us virtually for a conversation with Tamim Ansary about the patterns he sees in ancient civilizations and in current cultures derived from those historical developments. The four major rivers along which large-scale human civilizations began—the Nile, the Tigris–Euphrates, the Indus and the Huang He—each had characteristic traits that contributed to the underlying cultural assumptions our ancestors made about the nature of reality. Being who we are, mainly concerned with the world as seen through our own culture's eyes, for most of recorded history each major civilization has seen the other civilizations as peripheral players on this planet. Ansary shows how we have always been interconnected but that the speed at which that takes place in the 21st century has made many issues worldwide concerns requiring consensus on solutions, including climate change and the spread of deadly viruses. Ansary wants us to understand, in time, that each human civilization we have created mostly has points of similarity with every other civilization in our pursuit of happiness and that it is the points of cultural divergence that are truly peripheral.

Author, The Invention of Yesterday: A 50,000-Year History of Human Culture, Conflict, and Connection and Destiny Disrupted: A History of the World Through Islamic Eyes 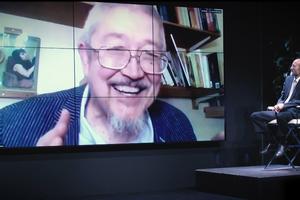