In 2005, Andy Warner went to Beirut, Lebanon, for a semester studying literature. Just 21 years old and having recently broken up with his girlfriend, Warner immersed himself in the vibrant and diverse city, quickly befriending a group of LGBT students. Amid their friendships, studying and partying, they also witnessed political assassinations and bombings once again erupting in Beirut. As the city descended into violence, Warner felt his grasp on reality slowly beginning to slip as he dealt with past traumas and anxiety over his future.

He recounts his experiences in the new graphic memoir Spring Rain, his third book. He is also author of the New York Times best seller Brief Histories of Everyday Objects and is co-creator of This Land Is My Land. His comics have been published by Slate, Fusion, American Public Media, KQED, UNICEF, the Center for Constitutional Rights, Buzzfeed and other media outlets. He was the recipient of the 2018 Berkeley Civic Arts Grant and the 2019 Hawai'i Volcanoes National Park artist in residency. He lives in Berkeley, California, with his wife and two children.

Join us for a conversation with Warner about his experiences in Beirut and his creative life since.

Image is detail from cover of Spring Rain 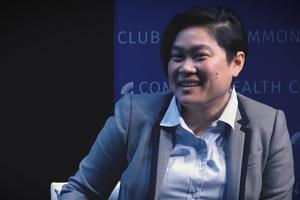