Rep. Pramila Jayapal: Medicare for All and the Progressive Fight

With a presidential election looming in 2020, what are the progressives in Congress doing to build political power and move their agenda forward?

As the elected co-chair of the Congressional Progressive Caucus—representing nearly 40 percent of the House Democratic majority, Representative Pramila Jayapal is on the forefront of the national progressive movement. In February 2019, Jayapal introduced the most comprehensive and progressive Medicare-for-all bill in history and has since secured four hearings on the bill—the first four hearings on Medicare for all in the history of Congress—and the support of more than half of the House Democratic Caucus. Prior to her election to Congress, Jayapal worked for two decades as an advocate for immigrant rights and racial justice and served in the Washington State Senate from 2015–2017.

Jayapal serves on the House Judiciary, Budget, and Education and Labor committees and has been an outspoken leader on expanding access to college, fighting for climate justice, taking on corporate greed and holding the administration accountable for its immigration policies.

Join us for a conversation with one of the Democratic Party’s rising stars as she discusses the path ahead. 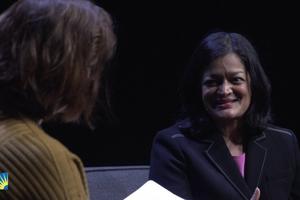 REP. PRAMILA JAYAPAL: MEDICARE FOR ALL AND THE PROGRESSIVE FIGHT