San Francisco’s newest top prosecutor Chesa Boudin first experienced the criminal justice system as a toddler, when his parents were convicted of murder and sentenced to life in prison. This transformative experience left an indelible mark on Boudin, who has dedicated much of his life to criminal justice reform. After graduating from Yale, becoming a Rhodes Scholar at Oxford and earning his J.D. from Yale Law School, Boudin began work at the San Francisco Public Defender’s Office. While he handled over 300 felony cases, Boudin never prosecuted a single case, instead favoring to work directly with victims of crimes and families of prisoners.

After a tightly contested race in 2019, Boudin emerged as DA-elect of San Francisco, where he hopes to make significant changes to a broken criminal justice system. With a focus on reducing mass incarceration and recidivism and increasing opportunities for restorative justice, Boudin is part of a larger trend of progressives appointed to top prosecutorial positions in cities that hope to end policies such as cash bail, the war on drugs and racial disparities in sentencing.

Bring your questions as newly confirmed DA Chesa Boudin forges a different path for crime, punishment and justice in the city. 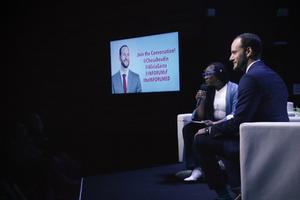