Finding the Humanity in AI with Rumman Chowdhury

As technology becomes more embedded in our lives, the fear of a big data takeover is becoming even more tangible. Recent headlines, including those reporting on the use of Artificial Intelligence (AI) in racially biased algorithms, “deepfakes” that are indistinguishable from reality and fatal accidents involving self-driving cars, have only contributed to these fears. Many of these stories, however, do not include ways non-tech people can gain agency over their data.

As a practicing data scientist and AI developer since 2013, Rumman Chowdhury is no stranger to the problems with tech. However, her optimism about the good it can do—in identifying cancer cells, for example, or helping you clean your apartment—has led her to focus her career on bringing humanity to data and including everyone in the process. Instead of sitting on the sidelines as bystanders to the techpocalypse, Chowdhury encourages both companies and consumers to take an active role in recognizing the real-world problems that perpetuate bad algorithms, instilling a moral compass in our tech.

Chowdhury has been recognized as one of Silicon Valley's 40 under 40, one of the BBC's 100 Women and is a fellow at the Royal Society of the Arts. She is currently the global lead for responsible AI at Accenture Applied Intelligence, where she works with c-suite clients to create cutting-edge technical solutions for ethical, explainable and transparent AI.

Come calm your fears about our data-driven future with Rumman Chowdhury as she joins INFORUM to break down how we can all work to shape AI for the better.

This conversation will be moderated by Moira Weigel, a postdoctoral researcher at the Harvard Society of Fellows and a founding editor of Logic magazine. 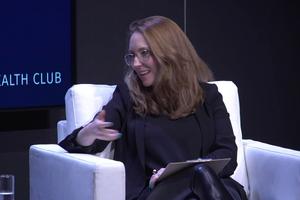 Finding the Humanity in AI with Rumman Chowdhury