Andrea Bernstein: The Trumps, The Kushners and American Greed

Andrea Bernstein is a senior editor at WNYC and co-host of the “Trump, Inc.” podcast. A Peabody and duPont-Columbia award-winning journalist, Bernstein’s new work is an exposé on two families at the pinnacle of American power. American Oligarchs: The Kushners, the Trumps, and the Marriage of Money and Power, is Bernstein’s investigative journey into two emblematic American families—the Kushners and the Trumps.

Jared Kushner and Ivanka Trump enjoy limitless access to the Oval Office, but beyond their marriage, little about the families’ relationship is public knowledge. Throughout American Oligarchs, Bernstein reveals their campaign into the White House by tracing history stretching from the Gilded Age to WWII to the 21st century. Bernstein draws on private interviews, never-before-seen documents and forgotten files in order to expose the families’ accumulated wealth through real estate, manipulation and crime.

Bernstein’s American Oligarchs is a serious examination of the half-truths, secrecy and media manipulation weaponized by the Trumps and the Kushners. Join us as she discusses the Trumps, Kushners, and the marriage of money and power. 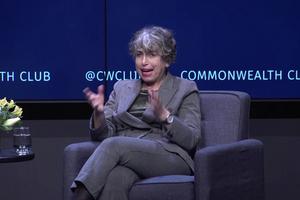 Andrea Bernstein: The Trumps, The Kushners and American Greed