Rick Wilson built his career as a star Republican political strategist. But following Donald Trump’s ascendancy during the 2016 campaign, the lifelong conservative became a vocal critic of the new Republican Party. His Twitter feed and columns for The Daily Beast give his followers a hilarious and refreshing take on national politics.

In his new book, Running Against the Devil: A Plot to Save America from Trump, Wilson gives Left-leaning and anti-Trump voters a guidebook to win again in 2020. As a conservative strategist against Trump, Wilson critiques what he sees as Democrats’ inability to run the campaign and candidate needed to beat Trump. Wilson analyzes the damage that Trump has done and predicts the prospective damage Trump could bring in the next four years. Drawing on his plethora of political experience, Wilson exposes the tactics that brought Trump to victory in 2016—and the tactics that he will use again in 2020.

Throughout Running Against the Devil, Wilson gives Democrats the tools to avoid the impending catastrophe of Trump’s 2020 victory. In this way, Wilson provides essential and much-needed advice for progressives, conservatives and civic participants to change the course of America’s future.

Rick Wilson
Republican Political Strategist; Columnist, The Daily Beast; Author, Running Against the Devil: A Plot to Save America from Trump—and Democrats from Themselves; Twitter @TheRickWilson

In Conversation with Melissa Caen
Journalist and Lawyer
Format 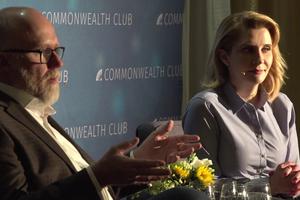