Secretary Mike Pompeo was sworn in on April 26, 2018. He previously served as director of the Central Intelligence Agency from January 2017 to April 2018. Mr. Pompeo graduated first in his class at the United States Military Academy at West Point in 1986 and served as a cavalry officer patrolling the Iron Curtain before the fall of the Berlin Wall. He also served with the 2nd Squadron, 7th Cavalry in the U.S. Army’s Fourth Infantry Division. After leaving active duty, Secretary Pompeo graduated from Harvard Law School, having been an editor of the Harvard Law Review.

Here's a rare chance to hear from Secretary Pompeo about current foreign policy challenges and issues of economic security.

In Conversation with Carl Guardino 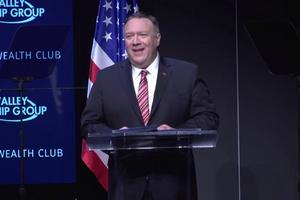