Do you ever sense that authentic connections have gone missing in your life? Do you feel sometimes as though your unique identity has been swept away by the tides of work and family? Do you hear the call to effect positive change in the world but can’t find a place to start? You are not alone. Just shy of her 50th birthday, former advertising agency CEO Anne Devereux-Mills lost her health to cancer, her last child to college and her job to the recession. Stripped of everything that had comprised her self worth, she set out on a path to rediscover her identity and recreate her life.

Realizing that she was missing relationships that were based on what she cared about as a person rather than what she did for a living, Devereux-Mills started a series of salons in 2012 that would gather together diverse groups of women based on topics they all cared about. She called the series Parlay House, and as the gatherings grew and expanded in cities across the world, she saw that they triggered a series of micro-actions among the participants. The result was a cascading wave of connection, support and strength that flowed out from the gatherings and into the wider world. She dubbed that cascade “the Parlay effect.”

In her forthcoming book, The Parlay Effect: How Female Connection Can Change the World, Devereux-Mills tells the story of Parlay House and uses her insights as its founder to show how small actions can result in a meaningful boost in self-awareness, confidence and vision. Woven through the book are the findings of research that Devereux-Mills conducted in collaboration with Dr. Serena Chen, a tenured professor of social psychology at UC Berkeley who investigated the social science behind the Parlay effect. The result is a book that offers a vision and a method for anyone who is going through a life transition and who wants to find and create communities that have positive and multiplying effects.

Please join Anne Devereux-Mills and The Commonwealth Club at the start of a new year to learn about and experience the Parlay effect for yourself. Devereux-Mills will be joined in conversation by comedian and storyteller Dhaya Lakshminarayanan.

Anne Devereux-Mills
Author, The Parlay Effect: How Female Connection Can Change the World 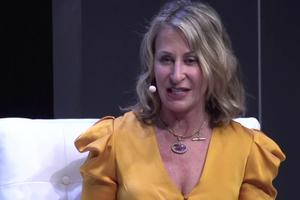