Microsoft President Brad Smith: The Promise and Peril of the Digital Age

As Microsoft’s president, Brad Smith leads a team of more than 1,400 business, legal and corporate affairs professionals working in 56 countries. He plays a key role in spearheading the company’s work on critical issues involving the intersection of technology and society, including cybersecurity, privacy, artificial intelligence, human rights, immigration, philanthropy and environmental sustainability. The Australian Financial Review has described Smith as “one of the technology industry’s most respected figures,” and The New York Times has called him “a de facto ambassador for the technology industry at large.”

Smith operates by a simple core belief: When your technology changes the world, you bear a responsibility to help address the world you have helped create. This might seem uncontroversial, but it flies in the face of a tech sector long obsessed with rapid growth and sometimes on disruption as an end in itself. While sweeping digital transformation holds great promise, Smith says we have reached an inflection point, and the world has turned information technology into both a powerful tool and a formidable weapon.

Come hear his view that new approaches are needed to manage an era defined by even more powerful inventions like artificial intelligence. Companies that create technology must accept greater responsibility for the future, he says, and governments will need to regulate technology by moving faster and catching up with the pace of innovation.

President, Microsoft; Author, Tools and Weapons: The Promise and Peril of the Digital Age 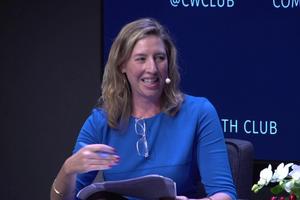 Microsoft President Brad Smith: The Promise and Peril of the Digital Age