Note: This program is sold out, but you can watch a livestream of the program on the Club's YouTube channel.

The comedy news quiz “Wait Wait . . . Don’t Tell Me!” is the most popular show on public radio. But it wasn’t always that way. The program didn’t take off until Doug Berman (who also produced the NPR hit “Car Talk”) took a chance on a playwright named Peter Sagal to serve as host. Ever since, the show has drawn enthusiastic audiences both on radio and in person, at its Chicago home and on the road. The program covers current news and is consistently both informative and entertaining. What’s the secret to the show’s success?

Peter Sagal, the host of “Wait Wait” since 1998, is an award-winning playwright, screenwriter and author, most recently of The Incomplete Book of Running. He has interviewed two U.S. presidents, appeared on “Late Night with Jimmy Fallon” and run a race in his underwear, but he insists that none of this has gone to his head. Peabody Award-winning producer Doug Berman is responsible for NPR's two most successful entertainment programs. He continues to create comedy shows seeded with a modicum of useful information or, as Berman puts it, "not a complete waste of time."

Here's a chance to laugh and go behind the scenes of this NPR phenomenon. Come with your own questions to stump Sagal and Berman.

In Conversation with Mark Zitter
Member, Commonwealth Club Board of Governors
Format 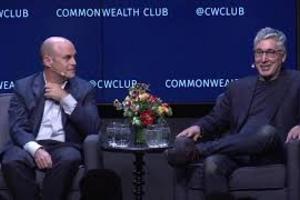