Robert Kaplan has served as the 13th president and CEO of the Federal Reserve Bank of Dallas since September 8, 2015. He also represents the 11th Federal Reserve District on the Federal Open Market Committee in the formulation of U.S. monetary policy.

Prior to joining Harvard in 2006, Kaplan was vice chairman of the Goldman Sachs Group Inc., with global responsibility for the firm's investment banking and investment management divisions. Previously, he served as global co-head of the investment banking division. He serves as chairman of Project ALS and co-chairman of the Draper Richards Kaplan Foundation, a global venture philanthropy firm that invests in developing nonprofit enterprises dedicated to addressing social issues.

Come for a rare conversation with a representative of the Federal Reserve about international and national economies and U.S. monetary policy.

In Conversation with Evelyn Dilsaver 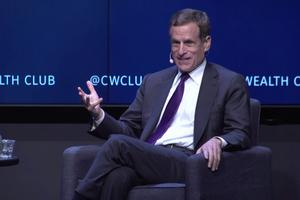