Mike Isaac: The Battle for Uber

Since its launch in 2009, ride-hailing service Uber has undergone major shifts to become a worldwide transportation network despite severe setbacks. Harassment allegations that led to the firing of 20 employees and the resignation of former CEO Travis Kalanick publicly embarrassed the company, yet Uber has grown to become the highest valued private tech company in Silicon Valley. In his new book, Super Pumped: The Battle for Uber, New York Times tech reporter Mike Isaac delves into the ambition, excess and massive loss of Uber and Kalanick over the last few years.

Isaac has nearly a decade of experience writing about technology industry in the San Francisco Bay Area. He has spent the past few years covering the controversial ascent of Uber and the company’s issues of workplace harassment, sexism and allegations of misconduct that reveal the problematic work culture of Silicon Valley tech companies. Join us as he narrates the deception and bad behavior of Uber that culminated in one of the most controversial periods in American corporate history. 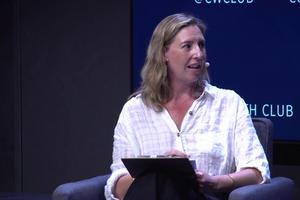 MIKE ISAAC: THE BATTLE FOR UBER