In August of 2017, white nationalists marched through the University of Virginia in Charlottesville to protest the removal of Confederate Army leader Robert E. Lee’s statue through a series of racist and anti-Semitic chants. The Unite the Right rally turned deadly when confronted by counter-protesters, in which a self-identified white supremacist drove his car into a crowd of people opposing the nationalists and killed a 32-year-old woman while leaving 19 others in critical care.

Former Democratic Virginia Governor Terry McAuliffe recounts his experience and perspectives during Charlottesville in his new book, Beyond Charlottesville: Taking a Stand Against White Nationalism. From declaring a state of emergency to condemning President Trump for claiming there were “very fine people on both sides” of the protest, McAuliffe takes a hard look at Virginia’s history of racism and the factors that led to the tragedy in Charlottesville. He lays out the work done afterwards to prevent future Unite the Right rallies and discusses what still needs to be done as America continues to grapple with its racialized history and its long struggle to fight racism, extremism and hate. 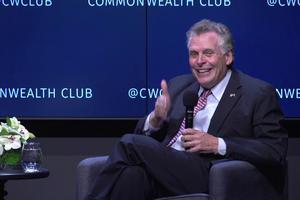