In 2012, after moving up the ranks at Condé Nast, Elaine Welteroth became the first African-American to hold the title of beauty and health director at Teen Vogue. At 29, she was eventually promoted to editor in chief, making her the youngest to hold the title in the company’s 107-year history and the second person of African-American heritage. Her reign at Teen Vogue was undeniably historic as she led the magazine in a new, fresh direction that allowed her young staff to create content centered on not only fashion and beauty, but also politics, social activism, world news and other topics that painted a more realistic, well-rounded picture of teen life.

Throughout her wildly successful career, Welteroth has often noted that she consistently found herself alone as the only black woman in the room. Her life is filled with stories of triumph despite the numerous roadblocks put in her way, and in her memoir, More Than Enough: Claiming Space for Who You Are (No Matter What They Say), Welteroth offers invaluable advice to young women looking to change the world in their own terms. She joins INFORUM to chronicle her life as a pioneer in media and to inspire a new generation of trailblazers.

Author, More Than Enough: Claiming Space for Who You Are (No Matter What They Say); Judge, "Project Runway"; Former Editor in Chief, Teen Vogue 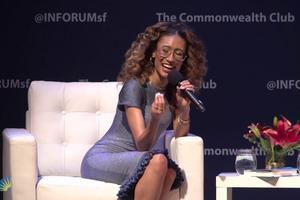