The United States experiences the highest number of school shootings in the world. Shannon Watts decided to do something about it. In the wake of the Sandy Hook Elementary School shooting, Watts, a mother of five and former communications executive, started Moms Demand Action for Gun Sense in America, an organization that advocates for gun regulation reform. Moms Demand Action has grown into one of the largest and most far-reaching organizations in American politics with a grassroots network in all 50 states and millions of supporters. Under Watts’ leadership, Moms Demand Action has enjoyed a 93 percent success rate in beating the NRA in state legislatures.

In her forthcoming book, Fight Like a Mother: How a Grassroots Movement Took on the Gun Lobby, Watts recounts how she and other mothers turned their outrage into action to drive progress in gun safety. The book celebrates the unique strength and power of women and highlights the potential for everyone to engage in everyday activism. In addition to her work with Moms Demand Action, Watts is the founder and board chair of Rise to Run, an organization dedicated to mobilizing young progressive women to run for office, and an active board member of Emerge America. Join Watts live at INFORUM as she shares her inspiring journey of how one woman’s cry for change became a driving force in a national demand for action.

This program is generously supported by Levi Strauss & Co.

Founder, Moms Demand Action; Author, Fight Like a Mother: How a Grassroots Movement Took on the Gun Lobby and Why Women Will Change the World 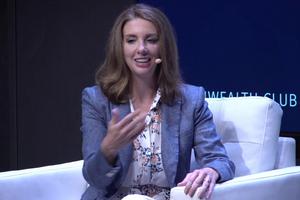