How do you come to terms with the need for an apology that will never come? How can the trauma of a childhood in an abusive household be put into words? And how can recounting the pain of those histories become a process of healing and personal reconciliation? These are the questions that Eve Ensler grapples with in her newest book, The Apology. It is a raw reckoning with a traumatic and unresolved past which has played an important role in Ensler’s artistic and political activist careers, and it shows other survivors of abuse how they may finally envision their own freedom from the past.

Ensler’s theatrical career took off when she wrote “The Vagina Monologues,” a work of such originality and power that it ran for over 10 years and has been translated into 140 languages. The performances inspired the creation of V-Day, a global platform to share the stories of survivors and for groups to raise money for the cause through their own yearly performances of “The Vagina Monologues.” Ensler has received numerous awards, including the Isabelle Stevenson Tony Award, a Guggenheim Fellowship in playwriting, an Obie and Glamour’s Woman of the Year.

Come join us for a discussion with a woman renowned for her artistic work and political impact on a topic for which words do not come easily but need to be heard. 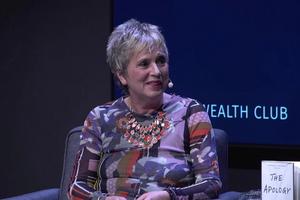