After eight years of Republican control, the blue wave of 2018 put Democrats back in charge of the U.S. House and made Representative Adam Schiff chair of the House Intelligence Committee. With broad power and jurisdiction, Schiff’s committee oversees the nation’s intelligence agencies, from components of the Departments of Defense and Homeland Security, Justice, and the CIA. While his investigations and public comments have made him one of the president’s favorite Twitter targets, Schiff has defended them as vital to American security.

As one of the leading Democrats in Congress, Schiff’s voice is one of the most important coming out of Washington, D.C. With their new majority, how will Democrats lead until the 2020 election? How will the completion of the Mueller investigation impact domestic politics? Join us for a timely and important conversation about politics and the integrity of the American political system.

In Conversation with John Diaz 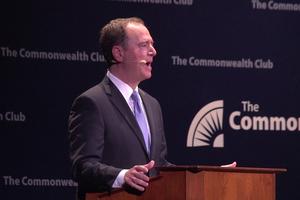