Julia Flynn Siler’s new book, The White Devil’s Daughters: The Fight Against Slavery in San Francisco’s Chinatown, is a revelatory history of the trafficking of young Asian girls—a practice that flourished in San Francisco during the first century of Chinese immigration (1848–1943)—and the "safe house" on the edge of Chinatown that became a refuge for those seeking their freedom. Starting in 1874, the brick house at 920 Sacramento Street in San Francisco’s Chinatown served as a home and gateway to freedom for thousands of enslaved and vulnerable young Chinese women and girls—a pioneering “rescue mission.” Known then as the Occidental Mission Home, it survived earthquakes, fire, bubonic plague and violence directed against its occupants and supporters—a courageous group of female abolitionists who fought the slave trade in Chinese women.

Donaldina Cameron was the indomitable leader of the home for over 37 years. In 1942, the home was renamed Cameron House, and it still serves the Asian-American community today, offering a range of social services and youth programs. With compassion and an investigative historian's sharp eyes, Siler relates how the women who ran the house defied contemporary convention and anti-Chinese prejudices. These women occasionally even broke the law by physically rescuing children from the brothels where they worked or snatching them off the ships that were smuggling them in, helping bring the exploiters to justice. Siler has also uncovered the stories of many of the girls and young women who came to the Mission and the lives they later led. Sometimes these women became part of the home's staff themselves, including Tien Wu, who became Donaldina Cameron’s translator and aide. Siler will talk about this remarkable story of an overlooked part of our history—a story that still resonates today. This is the tale of immigrants overcoming great difficulties with the aid of sympathetic Americans.

In Conversation with Helen Zia

Journalist; Author, Last Boat Out of Shanghai: The Epic Story of the Chinese Who Fled Mao’s Revolution 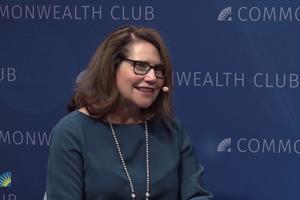