In her new book, Alpha Girls, award-winning journalist Julian Guthrie tells the unforgettable story of four different women who, through grit and ingenuity, became stars in the cutthroat, high-stakes, male-dominated world of venture capital in Silicon Valley, and helped build some of the foremost companies of our time.

Guthrie takes readers behind the closed doors of venture capital, an industry that transforms economies and shapes how we live. Through their experiences juggling work and family, the featured leaders and others continued to shape the tech landscape we know today while overcoming unequal pay, actual punches, betrayals, and the sexist attitudes prevalent in Silicon Valley and in male-dominated industries everywhere. Despite the setbacks, they would rise again to rewrite the rules for an industry they love, paving the way for the next generation of women along the way.

Join Guthrie for a powerful live conversation featuring Magdalena Yesil, one of the “alpha girls” in the book, and Meaghan Rose, a rising startup founder. The discussion will be led by Will Hearst of Journal of Alta California. They’ll explore the world of tech, startups, venture capital and work culture—and how it has and hasn’t changed.

Thank you to our media partner, Journal of Alta California, for their generous support and partnership.

Julian Guthrie
New York Times Best-Selling Author, Alpha Girls: The Women Upstarts Who Took on Silicon Valley’s Male Culture and Made the Deals of a Lifetime

Magdalena Yesil
Founding Investor and Board Member, Salesforce; Board of Directors, Informed, SoFi, Smartsheet and Zuora 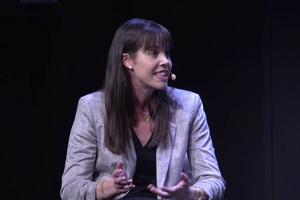