John Hickenlooper is a Democratic candidate for president of the United States. He is a former, two-term governor of Colorado and two-term mayor of Denver.

Hickenlooper's background is unique: After being laid off with thousands of other geologists in the mid-1980s, Hickenlooper was out of work for nearly two years before he and a friend decided to scrape together the money to open a brewery in an abandoned part of Denver. Working with a few other business owners, Hickenlooper helped create a new neighborhood that became a national model for urban revitalization.

In 2003, Hickenlooper ran and won as a "dark horse" for mayor of Denver. He eliminated a $70 million budget deficit without major service cuts or layoffs—cutting his own salary by 25 percent. Hickenlooper also instituted major police reform, expanded pre-k and created a sweeping mass transit plan. In 2005, with an approval rating of 92 percent, Time magazine rated him one of the five best big city mayors in America.

In 2010, Hickenlooper ran successfully for governor. He was reelected in 2014—one of only three Democrats to win a swing state in one of the worst cycles for Democrats in 25 years. In the past eight years, Colorado jumped from 40th in job growth to become one of the fastest growing rural economies in the nation. Hickenlooper also brought oil companies and environmentalists together to pass strict methane regulations in the country—a major contributor to climate change. Hickenlooper led Colorado’s recovery effort through major fires and floods, reopening roads, bridges and communities in record time.

Hickenlooper launched his campaign for president in mid-March. Come hear from this aspiring and accomplished political leader.

Senior Editor for the Politics and Government Desk, KQED—Moderator 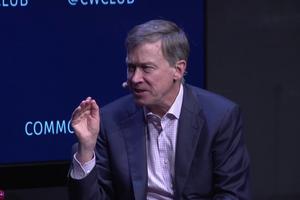