William J. Burns is widely acknowledged as a diplomatic legend, with the experience to match. He spearheaded talks that resulted in the elimination of Libya’s illicit weapons program, served as the U.S. ambassador to Russia and, most famously, initiated the opening of back channels that led to the historic Joint Comprehensive Plan of Action regarding Iran’s nuclear program.

He is only the second career diplomat to hold the office of deputy secretary of state. After serving under Hillary Clinton, he was widely acknowledged to be on Clinton's short list for secretary of state. Burns is known for being trusted by politicians on both sides of the aisle for his no-nonsense, can-do attitude.

In his new book, The Back Channel: A Memoir of American Diplomacy and the Case for Its Renewal, Burns tells the story of a lifetime. From the aftermath of 9/11, the Iran nuclear deal and everything in between, Burns gives us a glimpse into the inner workings of the State Department under five separate presidencies. Join us for an insider’s account of the last three decades of American diplomacy—and the lessons to be learned from them.

President, Carnegie Endowment for International Peace; Former U.S. Deputy Secretary of State; Author, The Back Channel: A Memoir of American Diplomacy and the Case for Its Renewal 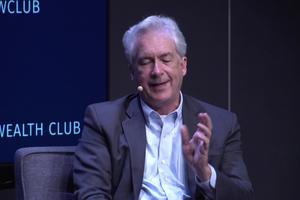