Bret Easton Ellis: Freedom of Speech in a Digital Age

Bret Easton Ellis, the best-selling novelist and screenwriter of the darkly incisive American Psycho and other hugely popular novels, is diving into nonfiction for the first time with his provocatively titled new book White, which blends his personal perspective in the entertainment industry and his sharp cultural insight into our digital age, simultaneously defining and defending the concept of freedom of speech.

While Ellis eschews the label provocateur, he remains outspoken in his frustration with identity politics and political correctness. In Ellis’ words, “Everyone feels muzzled now, and it comes down to how much you can take. Can I talk about what I’m feeling and say my opinion? You get to a point where there’s a break, a fissure, and you either decide to go through it and be yourself, or you decide to hide.”

Beyond his literary career, Ellis also expounds at length on film, books, music, culture and politics on “The Bret Easton Ellis Podcast,” and his Twitter feed is often feisty—agree or disagree with him, Ellis gets you thinking. Join Ellis live at INFORUM as he reflects on the state of political discourse in the United States and shares his unique perspective as an unfiltered and often polarizing cultural commentator. 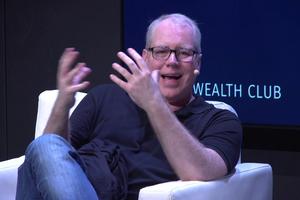 BRET EASTON ELLIS: FREEDOM OF SPEECH IN A DIGITAL AGE