Religion has always been something that both unites and divides us humans. To Reza Aslan, it seems that we focus more and more on the differences. Many people would be surprised to learn how much collaboration there was between the major religions at the time of their development, and how many similarities there are as a result. Aslan, a renowned scholar of religious history, delves into this in his book God: A Human History. He focuses on the remarkably cohesive attempt to understand the divine in human terms—nearly every religious tradition, as Aslan writes, conceives of God as “a divine version of ourselves.”

But this projection is not without consequences. As conceptions of God take on those qualities of virtue in human nature—compassion, a desire for justice—the divine also exhibits our greed and inclination toward violence. Having published best-selling books on the future of Islam, the life of Jesus Christ and religious extremism in a globalizing world, Aslan is especially prepared to answer these questions. No matter your religious beliefs, join us for a conversation that is sure to challenge your own conception of the divine and how it has shaped our world today. 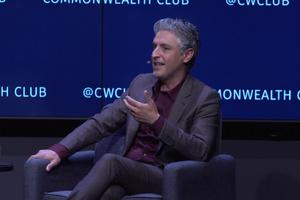