An Evening with Governor Jerry Brown and Anne Gust Brown

Join us for the first joint public appearance by the former governor and first lady since leaving office. Here’s a rare opportunity to hear their views on issues impacting the state, the United States and the world, in addition to learning about their unique relationship. Come for an engaging, unabashed and lively conversation, and bring your questions.

Anne Gust Brown married Governor Brown in 2005 and served as unpaid special counsel to the governor. Gust Brown grew up in Michigan and graduated from Stanford University and the University of Michigan Law School. She previously served as general counsel and chief administrative officer at Gap Inc. and helped run a number of Governor Brown’s successful campaigns.

This program is sold out; you can join the waitlist below 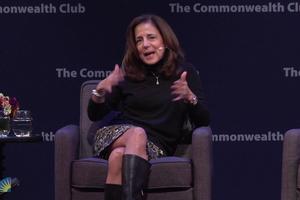 AN EVENING WITH GOVERNOR JERRY BROWN AND ANNE GUST BROWN