Representative Joe Kennedy III, at just 38, has already made a name for himself in Democratic politics. Elected in 2012 to his first term representing Massachusetts, he quickly rose to prominence as one of the younger voices in Congress. He gained new national recognition when he was chosen to give the Democratic response to the 2018 State of the Union and recently introduced Senator Elizabeth Warren (D–MA) when she made her public
announcement to run for president of the United States in the 2020 election.

Since he took office, Kennedy has leveraged his role to champion economic and social issues locally and nationally, including American manufacturing, workforce development, a livable minimum wage, affordable health care, mental health and addiction care, civil rights, immigration, and energy costs, with a focus on bipartisan efforts. He is a member of the influential House Energy and Commerce Committee and chairs Congress’ Transgender Equality Task Force. Locally, Kennedy remains closely in touch with his constituents by committing to his ongoing Tour 34, an initiative where he holds constituent office hours in all 34 Fourth District municipalities.

Join us for a wide-ranging conversation with a rising star of the Democratic Party about the future of a new generation of politicians and the key challenges facing the American people today. 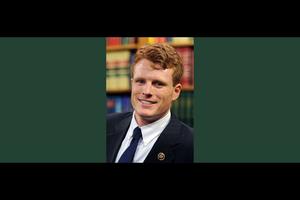