Following President Trump’s second summit with North Korea’s Kim Jong-un, what does the future hold for relations between South and North Korea as well as between both Koreas and the United States? Here is a chance for a rare visit with the U.S. and South Korean Ambassadors who are closely involved with these issues. They will discuss the economic and political relationship between the United States and South Korea and the outlook for diplomacy with North Korea and the entire region.

On August 30, 2017, Cho Yoon-je was nominated as the Republic of Korea’s ambassador to the United States by President Moon Jae-in. Cho was part of the emeritus faculty at Sogang University’s Graduate School of International Studies. He completed both a master’s and doctorate in economics at Stanford University.

Harry B. Harris Jr. was sworn in as U.S. ambassador to the Republic of Korea on June 29, 2018. Prior to his nomination, Harris was an admiral in the U.S. Navy, serving as commander. U.S. Pacific Commander Harris graduated from the Naval Academy and went on to receive an MPA from Harvard’s Kennedy School of Government and an MA from Georgetown’s School of Foreign Service. From January 2017 until April 2018, he was the U.S. Navy’s longest-serving Naval Academy graduate still on active duty. 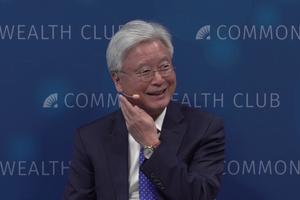