Even with just a two-word title, John Lanchester’s newest novel, The Wall, evokes the political divisiveness our time. In this dystopian future, current political issues are taken to their logical extremes: issues of mass immigration (and populist reactions against it) are cast as symptoms of the ultimate problem of climate change. Lanchester’s ability to merge reality with metaphor make the novel a poignant wake-up call in the context of global politics, which are often too shortsighted.

Join us with moderator Michael Lewis, best-selling author of Moneyball and The Big Short, for a witty back-and-forth between two authors who both have a knack for understanding some of the largest political issues of our time—and, more important, know how to communicate them in an effective and engaging way.

In Conversation with Michael Lewis
Author, Moneyball, The Blind Side and The Fifth Risk
Format 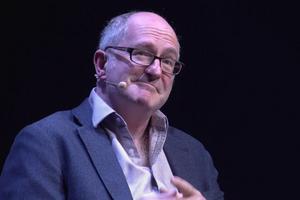