From the start of his career, former Starbucks CEO Howard Schultz has always been an unconventional businessman. With health insurance and free college tuition for part-time baristas to controversial initiatives about race and refugees, Schultz and his team challenge old notions about the role of business in society.

In his new book, From the Ground Up, Schultz tackles some of America’s most important and divisive issues. Schultz introduces a cross-section of Americans transforming common struggles into shared successes. He discusses inspirational stories about lost youth finding first jobs, post-9/11 warriors replacing lost limbs with indomitable spirit, former coal miners and opioid addicts paving fresh paths, entrepreneurs jump-starting dreams, and better angels emerging from all corners of the country.

Come hear an inspiring conversation with one of America’s most successful businessmen. Bring your questions.

This program is sold out; you can join the waitlist below.

Former CEO and Chairman, Starbucks; Author, From the Ground Up: A Journey to Reimagine the Promise of America 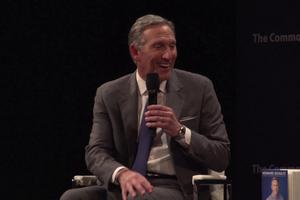