Only a few years ago, Washington Post journalist Jason Rezaian spent 544 days in an Iranian prison. Rezaian experienced interrogations, trials and the complexity of international negotiations. He was even used as a bargaining chip in the Iran nuclear deal negotiations. In his book Prisoner, Rezaian delves into his dramatic and suspenseful story as an American prisoner of Iran. He describes how friends and family in the United States worked tirelessly to advocate for his release, lobbying John Kerry and President Obama to seek his freedom.

Join us for this fascinating story from Rezaian, a Bay Area native, about hope, international justice, U.S.–Iran relations and the man caught in the middle.

Global Opinions Writer, The Washington Post; Contributor, CNN; Author, Prisoner: My 544 Days in an Iranian Prison–Solitary Confinement, a Sham Trial, High-Stakes Diplomacy, and the Extraordinary Efforts It Took to Get Me Out; Twitter @jrezaian

In Conversation with David Lang 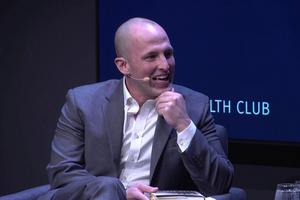