For Colored Girls Who Have Considered Politics

Donna Brazile, Yolanda Caraway, Leah Daughtry and Minyon Moore have worked behind the scenes of some of the country’s most influential and historic presidential campaigns in history, all four beginning their careers with the Rev. Jesse Jackson and eventually working with the likes of Bill Clinton, Al Gore, Barack Obama and, most recently, Hillary Rodham Clinton. Together they form a political supergroup they like to call “The Colored Girls,” and, like many other women of color in politics, they are unsung heroes of public service who have dedicated their lives to demanding diversity in American politics.

Brazile, Caraway, Daughtry and Moore paved the way for many women and people of color currently in the political arena, and they will visit The Commonwealth Club on the heels of an exciting midterm election where the topic of diversity was at the forefront. Join us as the four women discuss For Colored Girls Who Have Considered Politics, their new book, which chronicles their incredible stories, sheds light on their successes and offers insight on the many hurdles they faced in getting there. 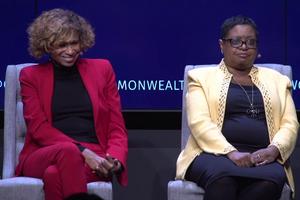 For Colored Girls Who Have Considered Politics