Join us for a timely discussion with leading voices from the transgender community on the problem of violence against transgender people; moderated by Michelle Meow, host of "The Michelle Meow Show" and former president of SF Pride.

Learn more about our panelists:

Elle Hearns is an activist and founder of The Marsha P. Johnson Institute, in Columbus, Ohio & Washington D.C. Elle Hearns is an award-winning African American transgender woman community organizer, speaker, strategist and writer. She is perhaps most well-known for her contribution to the development of the Black Lives Matter network, and her role in mobilizing community toward the development of multiple local chapters as a political project in the wake of the murder of Trayvon Martin. She is currently the founding executive director of Marsha P. Johnson Institute, a namesake community organizing institution inspired by the legacy of transgender legend and activist, Marsha “Pay It No Mind” Johnson. Named as one of Essence magazine’s “Woke 100 Women,” Hearn’s activism efforts have been featured by Time, CNN, MTV, The New York Times, The Washington Post, Essence magazine and more.

Diamond Stylz is a lifestyle influencer and activist in Houston, Texas. She is one of the premiere voices of the transgender American experience, most notably with her storytelling and inspirational video blog content on the Youtube platform—garnering more than 2.3 million views and a following of more than 10,000 people. In addition, she co-hosts "Marsha’s Plate," a podcast broadcasting thought leadership on transgender social justice issues. Based in Houston via Indianapolis, she began her activism efforts as a teenager, fighting the Indianapolis Public School District on the First Amendment right to wear her prom dress to her high school prom—and she won. As the first openly trans woman to attend a historically Black college in the deep south, she learned the significance of transgender visibility and how it can transform the mind, tolerance, and acceptance of people. With that in mind, she is dedicated to empowering and educating audiences on the experiences of African American transgender people.

Toni-Michelle Williams is an activist and co-director of Solutions Not Punishment Coalition (SNAPCO) in Atlanta, Georgia. She is a celebrated community organizer in prison abolition/prison reform issues, and the criminalization of poverty and Black transgender people. In addition, she is regarded for her innovation in framework development for Black transgender feminism and peer-led- community-based leadership development for Black transgender women. In a participatory research process, Williams was instrumental in the release of “The Most Dangerous Thing Out Here Is The Police” report on the experiences of transgender people in regards to Atlanta’s law enforcement, helping shape perspectives for lawmakers and changemakers on this social justice issue. She is best known for her infectious smile, hospitable spirit and dedication to her community.

Hosted by The Commonwealth Club in partnership with "The Michelle Meow Show" and the Kween Culture Initiative; in association with the San Francisco Human Rights Commission

LYFT DISCOUNT: Please enter the code under “promos” tab in the Lyft app. Valid for new and existing users; get 20 percent off one ride to or from the The Commonwealth Club of California. Max savings of $5 per ride. Does not cover tips, cancellation fees, or damage fees associated with the ride. Valid on November 26, 2018. Cannot be combined with other ride credit or offers. Subject to Lyft's Terms of Use. 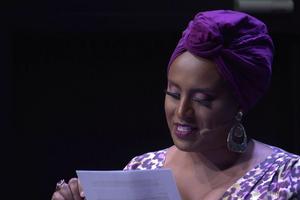