In many ways, there was no reason Julián Castro should have been successful. Born to unmarried parents in a poverty-stricken neighborhood of a struggling city, his prospects of escaping this circumstance seemed bleak. Yet he and his twin brother, Joaquin, did not let cynicism hold them back. Instead, they aspired to achieve the American dream despite unlikely odds.

Castro’s success as the mayor of San Antonio propelled him onto the national stage, where he was the keynote speaker at the 2012 Democratic National Convention—the same spot President Obama held in 2004. He then went on to Washington, D.C., where he served as the Obama administration's secretary of housing and urban development. His meteoric rise has many wondering if a presidential run is in his future.

Join us as Castro tells the unlikely story of how he believes the American dream can still lift unlikely heroes, no matter one’s politics.

In Conversation with Abdi Soltani 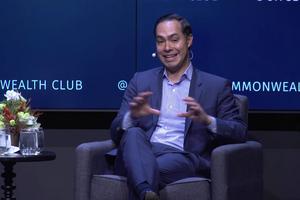