Law Professor Aziz Huq: How to Save a Constitutional Democracy

Democracies are facing multiplying challenges—from structural changes to geopolitical shifts to cultural transformations. Though the United States remains one of the strongest democratic nations in the world, it is by no means immune to democratic backsliding. As the American public becomes more polarized on issues such as the freedom of press and U.S.–Russia relations, will our institutions hold? Do the systemic weaknesses revealed by recent pressures on the U.S. Constitution require fundamental change in how the Constitution is interpreted and implemented? How likely is it that our democracy could erode? And what can be done to mitigate the risk?

Aziz Huq is a noted scholar on the interaction of constitutional design with individual rights and liberties. Before joining the law school faculty, Huq worked as associate counsel and then director of the Liberty and National Security Project of the Brennan Center for Justice at the New York University School of Law, litigating cases in both the United States courts of appeals and the Supreme Court. He was also a senior consultant analyst for the International Crisis Group, researching constitutional design and implementation in Pakistan, Nepal, Afghanistan and Sri Lanka.

In 2015, Huq received the University of Chicago Graduating Students Award for Teaching Excellence. He is a graduate of Columbia Law School.

This program is being held in partnership with the Jewish Community Relations Council. The Club is also a partner in the council’s Waging Democracy conference on Sunday, October 14. Please visit https://jcrc.org/news-events/events/waging-democracy for more information about the conference. 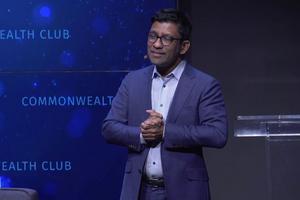 LAW PROFESSOR AZIZ HUQ: HOW TO SAVE A CONSTITUTIONAL DEMOCRACY