Congresswoman Barbara Lee has spent 20 years representing Oakland and the East Bay in Congress. First elected as U.S. representative for California’s 9th (now 13th) congressional district in 1998, she has enjoyed a storied career, including stints within the California State Assembly and State Senate.

Throughout her career, Lee has advocated for LGBTQ rights, minority rights, women's rights and an end to the cycle of poverty. Most notably, she was the lone vote against the war on terror, which was lauded by the anti-war community. Today, she serves on the House Appropriations Committee and the House Committee on the Budget, and she previously served as chair of the Congressional Black Caucus. 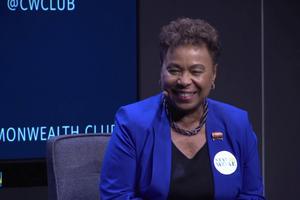