An Evening with Matt Nathanson: A Record Release Party

Join Matt Nathanson, singer, songwriter and Bay Area local, in conversation with author Kelly Corrigan about his brand new album, Sings His Sad Heart, due out October 5—as well as a special solo acoustic performance by Nathanson. All tickets include a copy of a signed Sings His Sad Heart lithograph, and copies of the album will be on sale. Nathanson is a multiplatinum-selling, chart-topping acclaimed singer-songwriter; O magazine calls Corrigan "the voice of her generation," and The Huffington Post calls her "the poet laureate of the ordinary.” Nathanson and Corrigan are friends joining up for a rare live evening together.

Based in San Francisco, Nathanson has evolved into one of the most applauded songwriters and engaging performers on the music scene today. His 2007 album, Some Mad Hope, yielded his breakthrough, multiplatinum hit "Come on Get Higher.” His 2013 release, Last of the Great Pretenders, debuted at No. 16 on the Billboard top 200 while hitting No. 1 on iTunes' alternative albums chart. Nathanson's latest album, Show Me Your Fangs, was hailed as his most adventurous and prolific album to date, featuring the songs, "Giants," "Bill Murray" and "Adrenaline.”

This year, Nathanson has announced that his new album, Sings His Sad Heart, will be released on October 5. The album comes on the heels of Pyromattia, which shot to No. 1 on iTunes alternative chart upon its release. Pyromattia featured a Def Leppard-approved cover album, based on their iconic Pyromania. Def Leppard’s Joe Elliott called the album “an amazing reinterpretation” with “heart & soul.”

Nathanson has been featured as a VH1 You Oughta Know artist and has performed on “The Howard Stern Show,” “Ellen,” “Conan,” “Jimmy Kimmel Live!,” “Dancing with the Stars,” “Rachael Ray” and the CMA Awards.

This program is sold out; you can add your name to the waitlist below

Matt Nathanson
Singer and Songwriter, Some Mad Hope, Last of the Great Pretenders, Show Me Your Fangs, Pyromattia, Sings His Sad Heart (Forthcoming) 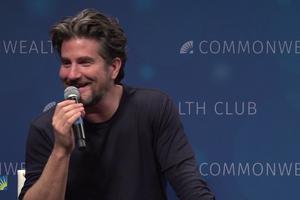 AN EVENING WITH MATT NATHANSON: A RECORD RELEASE PARTY