With technology, the economy and the world moving so fast, Eric Garcetti, the 42nd mayor of Los Angeles, California's largest city, will discuss Washington’s inability to prepare Americans for the future. Garcetti, who is considering a presidential run, argues that while Washington sows division—urban versus rural, coastal versus heartland, immigrant versus native citizen—the real division in this country is between Washington and the rest of us.

Garcetti is the chief executive of a government that serves 4 million people and also oversees the nation’s largest municipal utility and seaport as well as one of the nation’s busiest airports. Garcetti is also a leader among his peers, serving as chair of the U.S. Conference of Mayors’ infrastructure task force and as co-chair of the Mayors National Climate Action Agenda, which organized 407 Climate Mayors, representing 70 million Americans, to commit to the goals of the Paris Agreement after President Trump’s withdrawal from the accord. He is the advisory council chair of Accelerator for America, a nonprofit that identifies and supports local initiatives that create opportunity so they can be replicated city by city, nationwide.

Under his watch, Los Angeles has created a record number of jobs, and Garcetti has worked to expand immediate and future opportunity by leading and signing into law an increase of Los Angeles’ minimum wage to $15 by 2020, cutting Los Angeles’ business tax, and making two years of community college free. He also led the nation's largest anti-homeless and affordable housing initiatives and spearheaded the passage of the nation's largest local infrastructure plan—the $120 billion Measure M.

Los Angeles was named America’s top digital city in 2016 and 2017 by the Center for Digital Government and, this year, the Bloomberg Foundation selected Los Angeles as the only city to receive its top gold certification for excellence in city governance.

Garcetti's government service began on the Los Angeles City Council, where he spent four terms as council president before being elected mayor in 2013 and re-elected in 2017 with a record-breaking 81 percent of the vote. Garcetti was an intelligence officer in the United States Navy Reserve and is an avid jazz pianist and photographer. 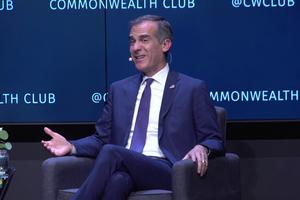