Michael D. Rich, President and CEO of the nonprofit, nonpartisan RAND Corporation, will discuss the phenomenon RAND is calling “truth decay”—the diminishing role of facts and analysis in American public life. Truth decay has led to the erosion of civil discourse, political paralysis, and disengagement from political and civic institutions. Concerned about truth decay’s effects on evidence based policy-making, RAND launched an in-depth research initiative to study the causes and address the consequences. Rich will share findings from RAND’s initial exploration, including a research agenda to help find solutions to the challenges posed by truth decay. Former President Barack Obama thinks RAND’s report is so important that he added it to his summer reading list. 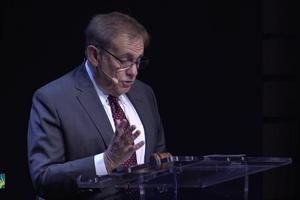