DeRay Mckesson on the Other Side of Freedom

In 2015, during the midst of police brutality and social unrest, DeRay Mckesson rose to national prominence not only for his role in the Black Lives Matter movement in Ferguson but also for his platform of choice: social media. Since his rise as a figure in both traditional and online activism, Mckesson has also established a wide-ranging career, running the gamut from podcast host of the popular “Pod Save the People” show under Crooked Media to mayoral candidate in Baltimore’s 2016 election.

His new book, On the Other Side of Freedom: The Case for Hope, is a memoir that dives into the systems that keep racial injustice in place. The book takes an in-depth look at the United States’ complicated history with oppression and race relations while also tracking the importance that technology has served in finding the “other side of freedom.”

DeRay Mckesson
Host, "Pod Save the People"; Civil Rights Activist and Organizer; Author, On The Other Side of Freedom: The Case for Hope, Twitter @deray 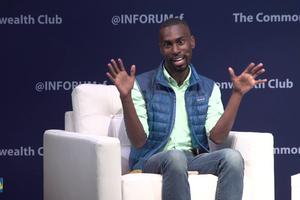 DERAY MCKESSON ON THE OTHER SIDE OF FREEDOM