Going Outside the Wire with Jason Kander

Jason Kander is no stranger to courage. From his beginnings as a combat veteran in Afghanistan to his position as an unlikely rising star in American politics, Kander’s trajectory is a fascinating example of bravery rooted in moral ethics. This bravery has put him at the forefront of the country’s political realm, with leaders such as Barack Obama touting him as the future of the Democratic Party.

Kander’s rise to prominence is marked by several unconventional accomplishments. At 31, as secretary of state in Missouri, he was the country’s youngest statewide elected official—and the first millennial. During the 2016 U.S. Senate election, Kander became an overnight viral sensation in a gun control ad where he advocated for stricter background checks while assembling a rifle blindfolded. In 2017, Kander founded Let America Vote, an action organization dedicated to ending voter suppression, and in 2018 Kander proved his loyalty to local community by officially announcing his run for Kansas City mayor.

In his new memoir, Outside the Wire, Kander not only details his fascinating life but also imparts wisdom to readers looking to make a difference on their own terms. Join us for an undoubtedly candid conversation about civic duty and staying true to your ideals. 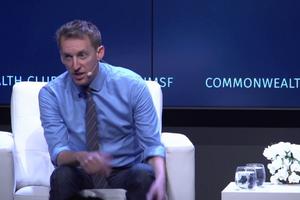 GOING OUTSIDE THE WIRE WITH JASON KANDER