The Heart of the Mission: Food, Community and Commerce

This program is part of our Food Lit series, underwritten by the Bernard Osher Foundation.

Communities such as San Francisco’s Mission District often center on food—it’s part of the fabric of the neighborhood and the economy. But what has happened to food culture and business as the neighborhood and the city at large grows and shifts? Join Gayle Pirie and John Clark, the chefs and co-owners of long-time beloved Mission District restaurant Foreign Cinema; Caleb Zigas, executive director of La Cocina; and William Ortiz-Cartagena, commissioner of the San Francisco Office of Small Business, for a conversation with moderator Julian Mark of Mission Local about the past, present and future of the vibrant neighborhood and city they work, cook and eat in every day. Come early for light bites from Foreign Cinema and La Cocina! 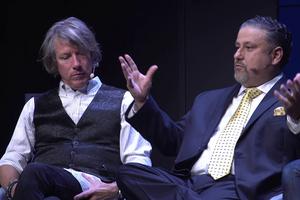 THE HEART OF THE MISSION: FOOD, COMMUNITY AND COMMERCE