Here’s a rare chance to hear from the Trump administration official who oversees Medicare and Medicaid. Seema Verma is only the 15th person ever confirmed to the post. She was nominated by President Trump and confirmed by the U.S. Senate on March 13, 2017. As administrator, Verma oversees a $1 trillion budget, 26 percent of the total federal budget, which administers health care programs for more than 130 million Americans.

A nationally recognized leader in health policy and operational design, Verma has guided health care policy in the public and private sector, working with states to build flexibility into their Medicaid programs to help them meet the diverse needs of their unique populations. As the architect of the historic Healthy Indiana Plan, she helped create and implement the nation’s first consumer directed Medicaid program. Administrator Verma is a graduate of the University of Maryland and holds a master’s degree in public health with a concentration in health policy and management from Johns Hopkins University.

This program is sold out; no tickets will be sold at the door 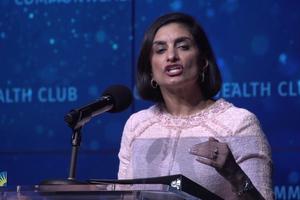