A Seat at the Table: Women in Venture Capital and Tech with Jess Lee

In 2017, all-women founder teams received just 15 percent of the dollars invested by venture capitalists in the United States. Venture capitalist Jess Lee and her peers have their work cut out for them, but they’re ready to make changes. Venture funding is often spurred by individual perspectives, so startups founded by women may not personally resonate with male venture capitalists. With women numbering only 9 percent of decision makers at U.S. firms, this means there are fewer women investing overall and a lack of representation on both sides of the coin. Since venture capital is an increasingly vital resource to support unique solutions for problems at every level, if funders and founders are not diverse, can the investment truly address a broad swath of challenges?

Lee was the founder of the digital fashion site Polyvore, and she is now the first female investing partner in the United States at the high-profile venture firm Sequoia Capital. She’s focused on investing with a social lens, in companies such as Wonolo, which looks at the future of work. She’s also one of 34 senior female investors who came together in 2017 to found All Raise, a nonprofit dedicated to doubling the percentage of women in partner roles in venture capital over the next ten years and increasing total venture capital funding to female founders from 15 to 25 percent in the next five years. All Raise has already launched efforts such as Female Founder Office Hours and Founders for Change–and they’re just getting started.

Join Lee for a conversation about the power of access and capital to create growth and change, and what founders, funders and consumers alike can do to ensure valuable resources are available to all. 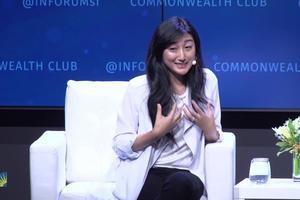 A SEAT AT THE TABLE: WOMEN IN VENTURE CAPITAL AND TECH WITH JESS LEE