California and Midterm Elections 2018 with The New York Times

Four prominent New York Times political journalists will take The Commonwealth Club stage to discuss the most consequential midterm election in a generation. What will the results mean for California and the nation? Following the California primary, Adam Nagourney, New York Times Los Angeles bureau chief, will moderate a discussion about the shape of the races, the role President Trump will play in this election, the future of polling and more. He will be joined by White House reporter Maggie Haberman, who was part of the team honored with a Pulitzer Prize in April for its coverage of Russia’s influence in the 2016 election; Nate Cohn, domestic correspondent for “The Upshot,” a data-driven blog that features a digital probability needle on The New York Times website on each election night; and national political correspondent Alex Burns. 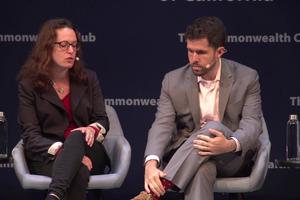 CALIFORNIA AND MIDTERM ELECTIONS 2018 WITH THE NEW YORK TIMES