Brooks and Cavanaugh brought together more than 30 of today’s top military and strategic experts, including generals, policy advisors, seasoned diplomats, counterinsurgency strategists, science fiction writers, war journalists and ground‑level military officers, to explain the strategy and the art of war by way of the Star Wars films. They provide a relatable, outside‑the‑box way to simplify and clarify the complexities of modern military conflict. Brooks makes the case for planet building on the forest moon of Endor to offer a unique way to understand our own sustained engagement in war-ravaged societies such as Afghanistan. They share how counterinsurgency waged by Darth Vader against the Rebellion sheds light on the logic behind past military incursions in Iraq.

In addition to holding a position at West Point, Brooks is also a senior resident fellow at the Atlantic Council’s Art of Future Warfare project and the author of World War Z: An Oral History of the Zombie War; and Cavanaugh is a U.S. Army strategist with assignments ranging from the Pentagon to Korea and Iraq to Army Space and Missile Defense Command.

Come for a fascinating look at the relevance of a galaxy far, far away to military actions on Earth in 2018. 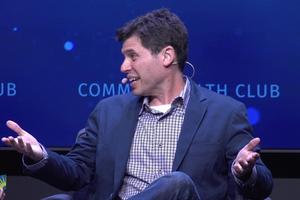