Katrina Lake became the youngest female founder and CEO to take a company public when her online personal styling company, Stitch Fix, completed its IPO in November of 2017. Lest that not be a big enough splash on the generally male-dominated business world, she did so on stage at the NASDAQ with her young son casually resting on her hip, setting the tone for a next generation of women leaders in tech.

Lake started Stitch Fix in Harvard Business School, and often faced skepticism from a mostly male venture capital world as she pitched the concept of the data-driven fashion company targeted at women. Seven years after Katrina received her first term sheet, Stitch Fix is valued at more than $2 billion, and has shipped millions of ‘Fixes’: boxes of clothes and accessories personalized for clients using a unique combination of algorithms and human stylists.

Beyond its success with customers and investors, Stitch Fix’s workforce is 86 percent female, and the company also focuses on representation in its leadership, maintaining a 50/50 split of men and women on its board. Stitch Fix was named one of Fast Company’s Most Innovative Companies of 2018, and Lake has been recognized as a Forbes 40 Under 40 recipient, as well as numerous other accolades.

Join INFORUM for a dynamic conversation with Katrina Lake about life as an entrepreneur, being a female CEO, and the future of style and technology. 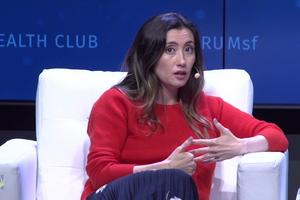