For Academy and Tony Award-winning actress Marcia Gay Harden, ordinary was never in the cards. As a child, she moved between exotic locations and demonstrated an innate talent for storytelling. It’s no surprise that she became a highly celebrated actress and now an author.

In her book, The Seasons of My Mother, Harden artfully depicts her creative bonds with her mother, Beverly. She uses floral imagery and ikebana, the Japanese art of flower arrangement, to connect her experience of becoming an artist to her mother's challenge to maintain her identity during her struggle with Alzheimer’s disease. This experience also drove Harden to become an activist for Alzheimer’s awareness.

Join Harden for a loving conversation about the intersection of art, remembrance and the unique love that exists between mother and daughter.

This is part of our Good Lit Series, underwritten by the Bernard Osher Foundation

Academy and Tony Award-Winning Actress; Author, The Seasons of My Mother: A Memoir of Love, Family, and Flowers; Twitter: @MGH_8

In Conversation with Kelly Corrigan 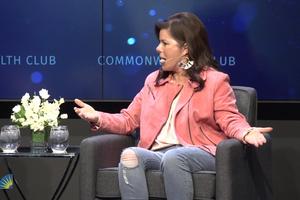