Dear Madam President: An Open Letter to the Women Who Will Run the World

Political operative Jennifer Palmieri is inspiring a new generation of leaders to shatter the glass ceiling, break down barriers and take control of their destiny. Palmieri served on the front lines of two historical and groundbreaking political operations, first as White House communications director for President Barack Obama and then as communications director for HIllary Clinton’s 2016 presidential campaign. Now, she’s making sure there is a playbook for future female political and professional leaders.

Palmieri argues that the roadmap for the path to a female presidency hasn’t yet been clearly drawn and that our country needs to reimagine women in leadership roles — from the boardroom all the way to the Oval Office. Join INFORUM for a conversation with Jennifer Palmieri and discover a blueprint for achieving your dreams and taking the world by storm.

This program is sold out 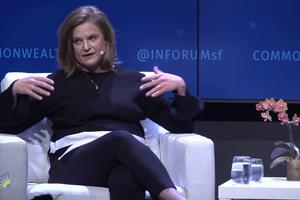 DEAR MADAM PRESIDENT: AN OPEN LETTER TO THE WOMEN WHO WILL RUN THE WORLD