Celebrate Women’s History Month with INFORUM and a conversation with local and national legend Betty Reid Soskin! At 96, she’s currently the oldest serving career park ranger with the National Park Service—just one chapter in a long life of public service and her active role in the social evolution of the United States.

Reid Soskin’s remarkable resume ranges from clerking in an all-black trade union during World War II to political activism and songwriting during the Civil Rights Movement, from running a record store to working as a congressional field representative, and, finally, to her work as a historian. When the National Park Service began to plan the Rosie the Riveter World War II Home Front National Historical Park in Richmond, CA, Reid Soskin played a key role in shaping and designing the park, ensuring that the reality of history—including racism, segregation and sexism—weren’t left out of the narrative. The great-granddaughter of a slave, Reid Soskin’s life spans World War II to the Civil Rights Movement to the election of the first black president, and her experiences and observations allow for unique insight into our country’s history.

The ultimate storyteller, she is the lead figure in a forthcoming documentary being made by Rosie the Riveter Trust detailing the African-American experience in the United States from World War II to the present day, and she was featured in a multi-part PBS special. She still regularly draws crowds to the park with her powerful presentations, blogs and writes regularly, and was even invited to officiate the White House Tree Lighting Ceremony with President Obama.

Join us for insights into Reid Soskin’s full life and the backdrop of history of which she and her work are a vital part  to this day.

This program is sold out; no tickets will be sold at the door 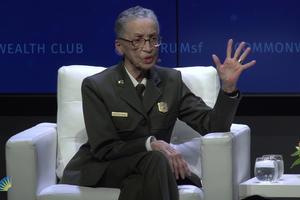